It’s been nearly two weeks of sick kids and a sick husband.  Everyone is finally starting to feel better, but needless to say, Chris and I have had ZERO time to ourselves and with each other, but that would all change last night.  We finally had a "romantic" evening together.  Without kids.  In the ER.

Yep, you heard me.  As if the ER hadn’t seen enough of the Morrows lately, THIS was our only escape in two weeks and in true Chris and Heather fashion we made the best of it.

Yesterday afternoon around 3:30 I started to feel a little "off".  My neck was hurting and my lips were feeling almost numb, but I didn’t think much of it.  At 6:00 when Chris and Lucee woke from a nap my neck was worse and my lips were definitely numb.  When I told Chris about it he immediately went into paramedic mode, asking me questions and testing my physical abilities.  He asked me to smile and blink and raise my eyebrows, all of which I was only able to do on the left side of my face.  Being a paramedic, he sees a lot of serious stuff so my little complaints of pain here and pain there usually just get brushed off because he knows I’m not dying.  But this time he was alarmed, which had me worried.  He told me I needed to see a doctor right away.  So, for the second time in four days I called Ask-A-Nurse and they confirmed that I needed to be seen immediately.  I was told that while they can’t diagnose a patient over the phone she felt confident it wasn’t a stroke, but wanted to rule out a tumor and agreed with Chris that it was likely Bell’s Palsy.

Chris’ mom came to sit with the girls and I immediately used my cell to Google Bell’s Palsy on the way to the ER.  While I’m not dismissing the seriousness of Bell’s Palsy, I read something that brought tears to my eyes.  Tears brought on from laughing my ass off.  This is what I read.  "…to prevent corneal infections some patients with Bell’s Palsy may be required to wear an eye patch…some patients develop a complication where the closing of the eye causes the corner of the mouth to lift involuntarily."  I said to Chris, "Arrrrggghh, matey!  Me looks like a pirate!"  And Chris laughed so hard he SNORTED.  TWICE.  And this was the beginning of our delightfully, romantic date in the ER.

Once we got checked in, my condition worsened, but our sense of humor improved.  We spent the evening cracking pirate jokes as we waited to find out about my condition.  At one point, Chris turned to me and said, "Baby, I love you.  I love you so much because you always let me make fun of you – whether it’s something you say, something you do or just your facial paralysis."  Oh my God!  Now, THAT is love.  And a quote I’ll never, ever forget.

After some more questions and physical examinations and a CT scan, I was diagnosed with Bell’s Palsy.  And a seriously sick sense of humor.

Bell’s Palsy is a type of paralysis (or weakness) of the muscles in the
face, thought to be due to inflammation of the seventh cranial nerve, also
known as the facial nerve. While it can strike anyone, it seems to occur more
frequently in individuals recovering from viral infections and people with
diabetes (neither of which I have). Bell’s palsy affects only one side of the face at a time, and only
rarely recurs in the same individual.

Bell’s palsy tends to come on very suddenly. You may go to bed one night
with no noticeable symptoms, only to peer in the mirror the next morning and
notice that your face appears to be drooping. Mine came on within a matter of hours and I showed almost every symptom of the condition.

Within a day or two, the paralysis usually reaches
its peak. Most people start to recover within a couple of weeks and are
completely recovered within three months. Some people who develop Bell’s palsy
have a longer recovery period or have some permanent symptoms of the
condition. 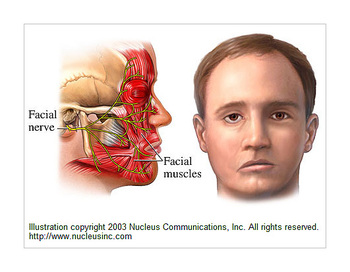 I’ve still got really bad pain in my ear and neck, but I’ve got good meds for that.  It’s hard to eat and drink because I can only feel one side of my mouth and there’s only a small spot in my mouth that has a sense of taste, but it’s my eye that’s really bothering me.  Because I can’t close it all the way it’s very dry and I’m having some difficulty seeing at times.  I’m using artificial tears to help with the dryness and I have to tape it shut at night.  While I don’t have to wear a patch, Chris would soooooo get off on buying this for me. 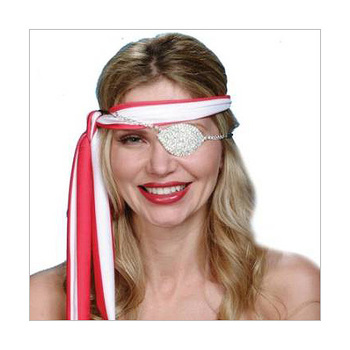 This may seriously be the longest blog post ever, but I wanted to share with you what’s going on with me.  If anyone else has ever had Bell’s Palsy, please leave a comment here on the blog or drop me a line.  I’d love to hear from you.

In the meantime, I’ll be on the couch, doped up, taped up, and listening to my husband crack pirate jokes.

Until next time,
H